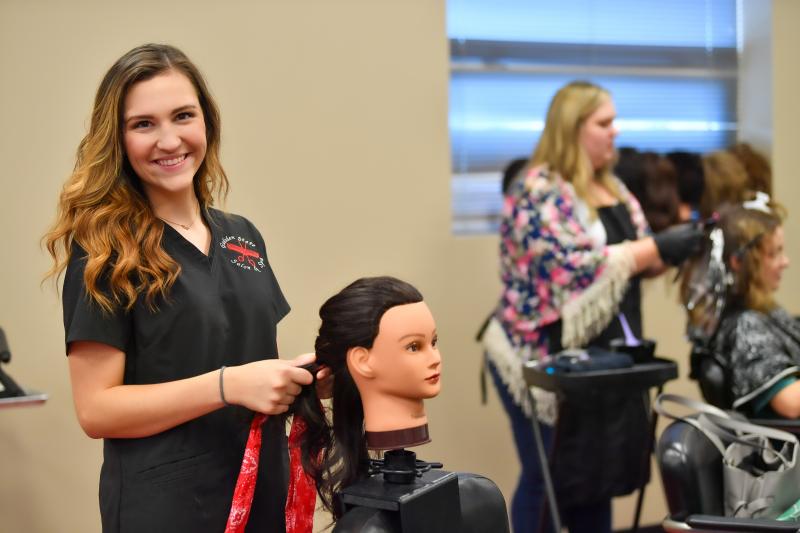 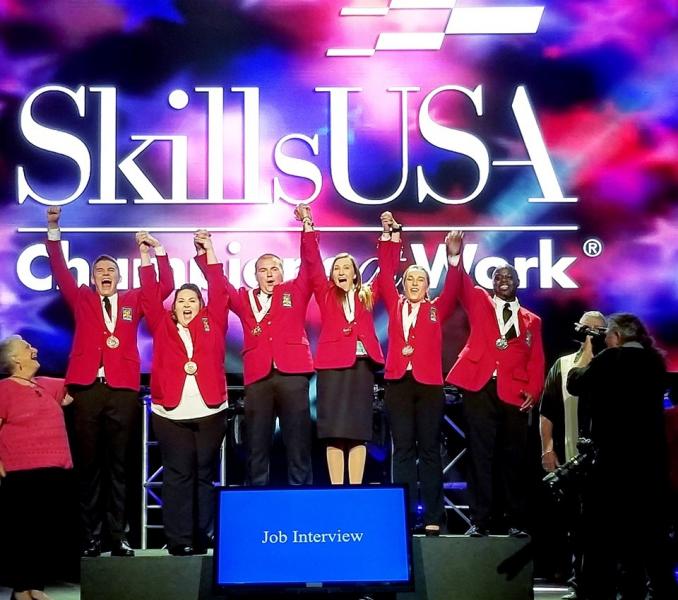 Rebecca Gaston, a student at Gadsden State Community College, brought home the top prize in Job Interview from the National SkillsUSA Competition held in Louisville, Kentucky. She is the only gold medalist from Gadsden State and only one of six from the state of Alabama.

“I’m so proud of winning the national competition,” said the Alexandria native. “I had the time of my life.”

Gaston has not had a lot of joyous moments in her 20 years of life. After her mother was killed in a car accident when Gaston was a baby, she seldom had stability or encouragement.

“I was passed around from grandparents to aunts and uncles,” she said. “I had a lot of hardships but I was not going to let it define me.”

After high school, she enrolled at Gadsden State to study Salon and Spa Management. She received enough financial assistance to be able to pay room and board at Fowler Hall, Gadsden State’s student dormitory.

“It was a blessing,” she said. “It helped me grow to be more independent and responsible. It was also during my time in the dorms that I grew closer to God and started going to church regularly.”

Gaston became involved in student activities at Gadsden State earning a scholarship as an ambassador and serving as a member of Students Without Borders. She also won the President’s Cup, one of the highest student honors at Gadsden State.

“One of the blessings in teaching is to see a student overcome difficulties and rise to the top,” said Kristi Clifton, a Salon and Spa Management instructor at Gadsden State. “Rebecca has done just that. She has an amazing story of resilience that she is glad to share with others. She has overcome many problematic situations in her life, and she never gave up. I cannot wait to see her future unfold.”

It was Clifton who talked to Gaston about participating in the job interview category of the SkillsUSA competition. They first worked together to prepare Gaston for the state competition in Birmingham. They had a set of guidelines to follow that covered everything from resume development to wardrobe.

“We went through each guideline to make sure we were doing everything perfectly,” Gaston said. “For my resume, we made sure that it was fresh and fun. It was not your standard resume. The judges were very impressed with it and asked if I was a graphic designer.”

“They were very serious about making sure I was prepared,” Gaston said. “During the final mock interview, they acted like they didn’t even know me. Hearing the opinions of three people really set me up for the gold. They helped me so much.”

At the state competition, she made a perfect score on the skills knowledge test before participating in the job interview. She was judged from the moment she entered the room, starting with how she greeted and interacted with the receptionist.

“We worked so hard, so I was very prepared,” she said. “It was so much fun. After I was done with the competition, I knew I killed it.”

Gaston won the gold medal in the state job interview competition. She only had points deducted for not placing more focus on her already-attained knowledge in the cosmetology field and for having a button undone on her blazer.

“I was disappointed that I made little mistakes but it couldn’t take away my joy of winning,” she said. “It was such a great feeling when they called my name.”

Back in Gadsden, she and Clifton started preparing for the national competition.

“Mrs. Clifton instilled faith and confidence in me,” Gaston said. “Without her encouragement, I don’t know that I could’ve done it. She put in the hard work with me. She built me up. She is a wonderful teacher.”

Though she was prepared, the national competition was overwhelming at first.

“There were tons of people there,” she said. “I was sizing people up who were my competition, and I started getting a little intimidated. But, I decided I would just smile and intimidate them right back.”

The first round of competition included completion of a job application with references within a 30-minute time limit followed by an interview with two judges.

“They asked me six questions that were included in our pre-competition packet but they added a few other questions to throw me off,” she said. “They wanted to see if they could catch us off-guard.”

For the final question, Gaston had to give a reason for them to hire her over someone who is equally qualified.

“I just looked them in the eyes and told them to take a chance on me,” she said. “I assured them they wouldn’t be sorry.”

Still, she was not as confident as she was at the conclusion of her interview at the state competition.

Gaston got to have her “do-over” when she was selected as one of the Top 8 to advance to the finals. This was the opportunity for her to shine, she said.

“I had to do my best, so I stayed up with Mrs. Clifton until 11 p.m. preparing for the next day’s final competition,” she said. “She recorded me so we could review my performance and make sure I fixed any mistakes.”

The final round included a four-page job application and a 250-word essay as well as an interview in front of a three-person panel.

“They asked me a lot more questions and I nailed them all,” she said. “I felt good afterwards. Thank you, God, for second chances.”

At the awards ceremony, she waited to see if she would be among the Top 3 best job interviews in the country. When they named her the gold medal winner, she was thrilled.

“I honestly was overwhelmed,” she said. “I had chills all over my body. It was awesome. I just couldn’t believe it.”

As the winner, Gaston received a medal on a ribbon while her coach received a commemorative medallion.

“I was so proud to give the medallion to Mrs. Clifton,” Gaston said. “It was truly a highlight for me.”

In addition, she received a Kindle Fire tablet and a gift card.

“The entire experience was wonderful,” she said. “I met a lot of great people from all over the country. We went to a baseball game and an amusement park. I made new friends. I wouldn’t trade my experience for anything in the world.”

Everything seems to be falling into place for Gaston after years of personal strife. She has received her student permit and will complete an internship at a hair salon in Alexandria. She will graduate with an associate degree in December, and she finally has a place to call home. Through a Bible study group at City Church, she met Larry and Nicole Hill of Southside. They opened their home to her.

“It is such a relief to have someone who trusts me and believes in me and loves me like their own child,” she said. “I come from so much hurt, but they have been great to me. I know I will always have them as my family; my chosen family.”

The Automated Manufacturing Team brought home the silver medal to Gadsden State. Team members include Daniel Anderson of Boaz, James Clark of Wellborn and Zackery Cowley of Glencoe. The instructors for the team event are David Smith and James Wilson.

The SkillsUSA competition is a partnership among students, teachers, schools and industry working together to showcase talent. The national organization for college/postsecondary technical students enrolled in trade, technical and skilled service profession instructional programs represents more than 300,000 students and instructors. SkillsUSA has 13,000 school chapters in 54 state and territorial associations.