“Coach Phillips has already been an important part of the coaching staff for our women’s basketball team as not only a recruiter and an assistant coach but also as a mentor and role model,” he said. “We are proud that he has accepted the promotion to head coach.”

Phillips was a basketball stand-out at Etowah High School from 2004 to 2008. He earned All-Area honors and received a number of scholarship opportunities but decided to forgo college.

“I had a decision to make,” he said. “I could go to college or I could marry my high school sweetheart and get a full-time job.”

He followed his heart and married Kayla, who has been his wife for nine years and mother of his two sons Cooper, 7, and Ridge, 3.

“It looks like I made the right decision,” he said.

Phillips, who has worked full time as an operations support specialist for the City of Tarrant Electric Department for the past 11 years, got back into the world of basketball in 2012 as an assistant basketball coach to James Graves, head basketball coach at Etowah High School. Almost three basketball seasons ago, he was hired to work with Dixon as a Lady Cardinals coach.

“I wanted to be a basketball coach because I love the game and I love being a positive role model for student athletes,” he said. “I feel as if God has blessed me and that my main purpose in life is to lead young athletes not only on the court but in life as well.” 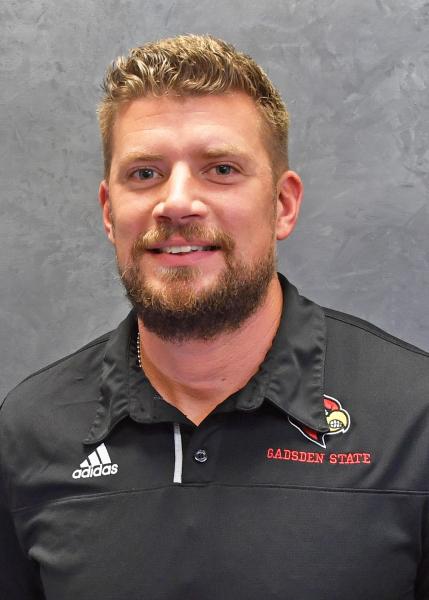 “I think we have one of the best recruiting classes we have had in years,” he said. “I plan to work hard with them to get Gadsden State back on top. We haven’t won a conference championship since the 2004-2005 season. I want to change that.”

But, it’s not all about championships for him.

“My ultimate goal is to get scholarship offers to Division I or Division II schools for my players,” he said. “I do it more for the athletes than I do for conference recognition.”

Now, he is working toward a bachelor’s degree in sports management through Columbia Southern University’s online program. He hopes to one day be a full-time coach.

“I have worked really hard to get to where I am so far,” he said. “My family has been very supportive, especially my wife. I wouldn’t be where I am without her.”

He is also grateful for the head coaches who have mentored him.

“Coach Dixon opened the door for me at Gadsden State,” he said. “He got me into collegiate sports. And, Coach Graves encouraged me to ‘coach up.’ I really appreciate everything they’ve done for me.”

He’s happy that Cancilla and Dr. Martha Lavender, president of Gadsden State, have given him the chance to prove himself as a head coach.

“I’m thankful they believe in me and see me as the right fit for the job,” he said. “This means so much to me and my family. I promise to represent Gadsden State in the best way I know how.”

Phillips is optimistic about the future of the Gadsden State Lady Cardinals.

“I encourage anyone who likes basketball to come out to Beck Field House and watch us play this season,” he said. “We are going to play fast-paced up-tempo basketball. It’s going to be exciting.”