Gadsden, Ala. – In celebration of Black History Month, Gadsden State Community College’s Valley Street Campus staff led a series of tours for local dignitaries, including members of the Gadsden City Council, Etowah County Commission, administrators from local school systems and the boards of directors of the Gadsden State Alumni Association and Cardinal Foundation.

“The purpose of the tours was to spotlight our campus, the services we provide to students and our programs,” said Shameka Gilyard, Title III director at the Valley Street Campus. “We are proud to be the area’s only Historically Black College and University. A lot of people in our area don’t even realize we have an HBCU designation.”

Valley Street has a long and storied history in Etowah County. It opened its doors in 1960 as the Gadsden Vocational Trade School, a private vocational training school for Black Americans. It was founded by Eugene N. Prater, director of the Veterans Continuation Program for Negroes, in response to discontent expressed by Black veterans in Etowah County for being denied admission to the all-white Alabama School of Trades.

“Mr. Prater is considered one of our area’s greatest education pioneers,” said Kimberly Campbell-Dixon, a Title III retention advisor. “When he saw that Black veterans in Etowah County were not receiving higher-learning opportunities, he decided to do something about it. He initiated the project with the slogan, ‘Help Us to Help Others.’”

In the beginning, the Gadsden City Board of Education provided three buildings on Pipe Shop Street to be utilized for the Gadsden Vocational Trade School project. Many area leaders, including local physician Dr. J.W. Stewart; E.L. Darden, director of the Alabama School of Trades; and Harrell Lopshire with the Gadsden Chamber of Commerce, supported the project.

“The main source of funding to make repairs to the donated buildings was provided by the general public who gave through roadblock fundraisers,” she said.

On Aug. 30, 1961, the General Education Appropriations Bill provided a two-year fund of $25,000 for the operation of the school, which also became a part of the Alabama State Education System. Soon, it was also approved by the Veterans Administration for training under the GI Bill.

By August 1961, enrollment was at 71 and the school was offering courses in auto mechanics, auto body work, plastering and cement finishing, brick masonry, woodworking, dry cleaning, general business and tailoring.

“Until desegregation in 1970, it was the only technical school in the area enrolling Black Americans,” Campbell-Dixon said.

In 1972, the school was renamed Gadsden State Technical Institute. In October 1997, the school – now known as the Valley Street Campus – earned the HBCU designation. The following year, the U.S. Department of Education’s Title III Program began on the Valley Street Campus. The mission of Title III is to further provide resources and support that will strengthen the quest for an individual’s successful completion of their goals by encouraging intellectual and technical skills of students and faculty, Gilyard said.

“The mission of the campus is to foster recognition and promotion of the inherent dignity of each person attending Gadsden State and to welcome students, faculty and staff from all ethnic and cultural backgrounds,” she said. “This mission is in accordance with Gadsden State’s overall purpose, mission and philosophy.”

The tours put the campus’s services and programs on display beginning with a presentation on information technology available to faculty, staff and students thanks to Title III funding.

“Each tour went great and provided opportunities for student- and program-centered conversations geared toward the improvement of student success and community outreach,” he said.

Shane Ellison, the chief administrative officer for Etowah County, was impressed with what he saw during the Valley Street Campus tour.

“The campus is truly a hidden gem,” he said. “They offer programs across a wide range of fields that prepare students of all ages to be highly contributing members of the workforce.”

For more information about programs and services offered at all of Gadsden State’s campuses, including the Valley Street Campus, visit gadsdenstate.edu. 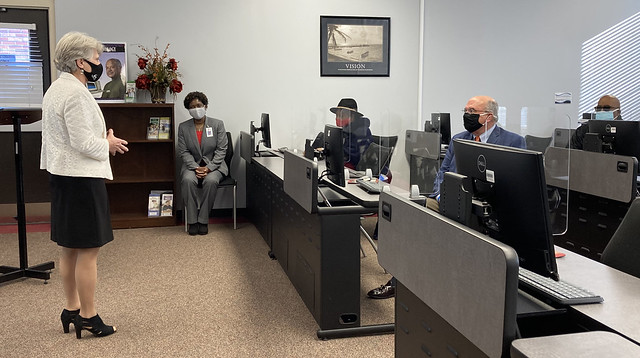