Gadsden, Ala. – The Cokers went to college at Alabama School of Trades and gained much more than a skill set that would create long-term careers. They found life-long partners.

“We know that the trade school brought us together,” said Deborah Coker. “It’s really funny how it all came about.”

Deborah graduated from Gadsden High School in 1970 and, a week later, she enrolled at the Alabama School of Trades, now known as Gadsden State Community College’s East Broad Campus. She was in the secretarial studies program, which required students to not only learn the necessary skills of administrative assistants but to also perform housekeeping duties.

“One day, I was sweeping the sidewalk in front of our building,” she said. “We had to dress professionally every day. We had to wear skirts or dresses, even when we were doing our housekeeping chores.”

“I nearly ran a stop sign looking at her legs,” he said. “I couldn’t help it. She was so beautiful.”

Still, Jimmy was too bashful to speak to her even though he saw her regularly on campus. He told one of his friends, a cosmetology student, that he really wanted to meet Deborah.

“She walked up to me and said, ‘Wait right here. I have to introduce you to someone who asks me every day what your name is,’” Deborah said. “She introduced us and made us sit together. We talked a lot. That’s where it all began.”

They told each other everything, including the fact that they both had been engaged before.

“We shared our stories and got to know each other,” she said. “I liked everything about him. He was so cute. I knew I wanted to marry him but I also knew I didn’t want the same engagement ring he used before.”

Six months after meeting, the Cokers got married on Jan. 29, 1971. They were happy but they were strapped for cash since they were both still in college.

“We lived in a small apartment with a murphy bed and bugs,” Jimmy said. “We were poor but we were in love. We were young so we had the energy to work hard.”

After a short stint in the heating and cooling program, Jimmy was in his second year as a heavy equipment student when they got married.

“It was hard to find people skilled enough to work on heavy equipment so I knew once I graduated, it would be easy for me to find a job,” he said.

As a student, he would work on heavy equipment owned by Gadsden State Junior College, now known as the Wallace Drive Campus, and a local dealership would donate engines for them to work on.

“We really had a lot of hands-on learning opportunities,” he said.

They also spent some time pulling practical jokes on their instructor, W.C. West.

“We put an innertube in his locker and when he opened it, the innertube exploded,” he said. “He lit a fire under us. He was so mad but we liked to have a little fun.”

Meanwhile, the secretarial studies program was a little more subdued than the rambunctious heavy equipment program.

“My program was very, very hard but I never regretted enrolling,” Deborah said. “A lot of my schoolmates didn’t make it through the program. I was determined to succeed. I never studied so hard in my life. They really stressed perfection in the program, and the instructors expected it from the students.”

It was her classmates who kept her encouraged and focused in the challenging program.

“I had a good group of friends,” she said. “I really fit in with them. We helped each other a lot. I was an average student in high school but I became an A student in college. I knew I found exactly what I wanted to do for a living.

While she disliked learning shorthand, she enjoyed learning about accounting, correspondence and filing.

“I took a lot of skills with me from the Alabama School of Trades,” she said. “It certainly benefitted my career.”

After graduation, Jimmy worked for Thompson Caterpillar before taking a position at McCartney Construction in Gadsden, where he started as a mechanic and worked his way to shop supervisor. He retired in 2016 after 44 years of service.

Deborah’s first job was as a bookkeeper in a bank in Gadsden. She eventually became responsible for all commercial loans. A few years later, she took a job as a bookkeeper and customer service representative at a gas company in Cherokee County. She stayed there for 15 years. Through the years, Deborah worked as a payroll clerk, cost accountant, office manager and accounting supervisor. Her final position was as the office manager and paralegal at a law firm in Centre. She retired in 2014.

“I guess you could say I’m a jack of all trades,” she said. “I had a lot of wonderful jobs during my career.”

After being married over 50 years, the Leesburg couple still very much enjoy each other’s company.

“My advice to married couples is to be flexible,” Jimmy said.

“I was raised with three brothers and I was as mean as they were,” Deborah said. “I was always ready to fight but I quickly learned, you can’t do that to Jimmy Coker. He doesn’t fight. He doesn’t fuss. He doesn’t argue. He just won’t do it.”

She said it is so important to be kind and respectful to your partner.

“Kindness and respect will lead to many years of happy marriage,” she said. “Always be interested in what your spouse is talking about. Show concern when they are hurting. Try to talk through the bad times. You don’t have to get your way all of the time. Compromise. And, never go to bed mad.”

Jimmy said it was divine intervention when he saw her in 1970 sweeping the sidewalk.

“It’s amazing how it has all worked out for us,” he said. “We’ve lasted this long so we’re doing something right.” 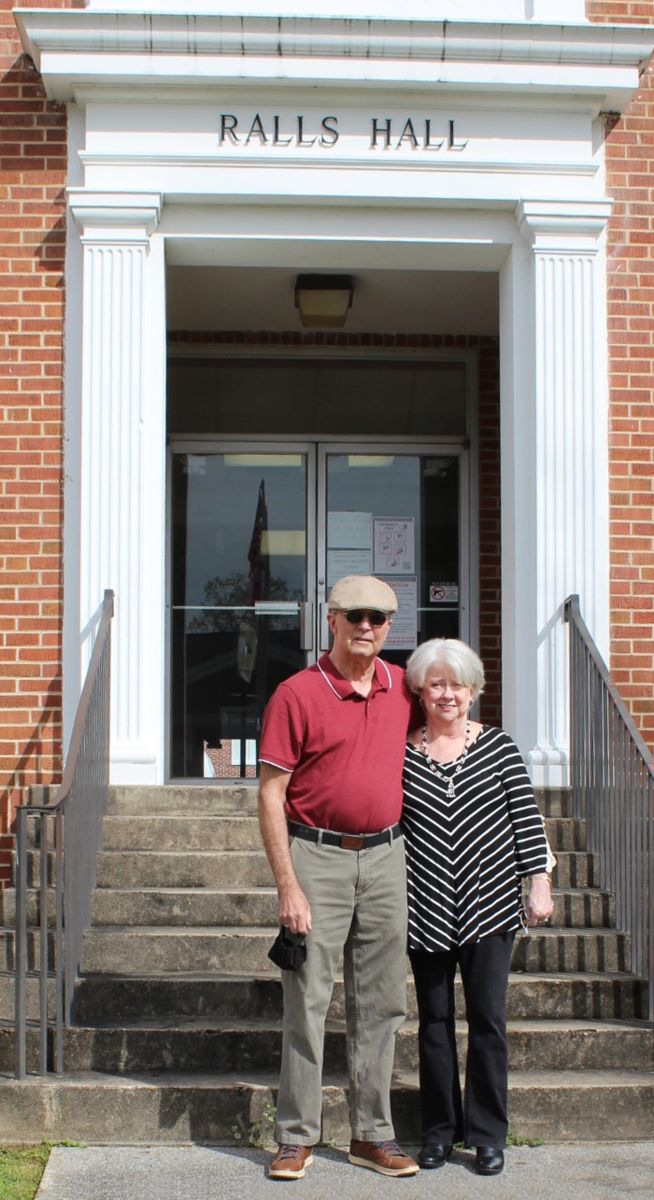 Above: Jimmy and Deborah Coker stand in front of the building where they saw one another for the first time in 1970. She was sweeping the sidewalk and he was driving by her. They were eventually introduced by a fellow student in the cafeteria.