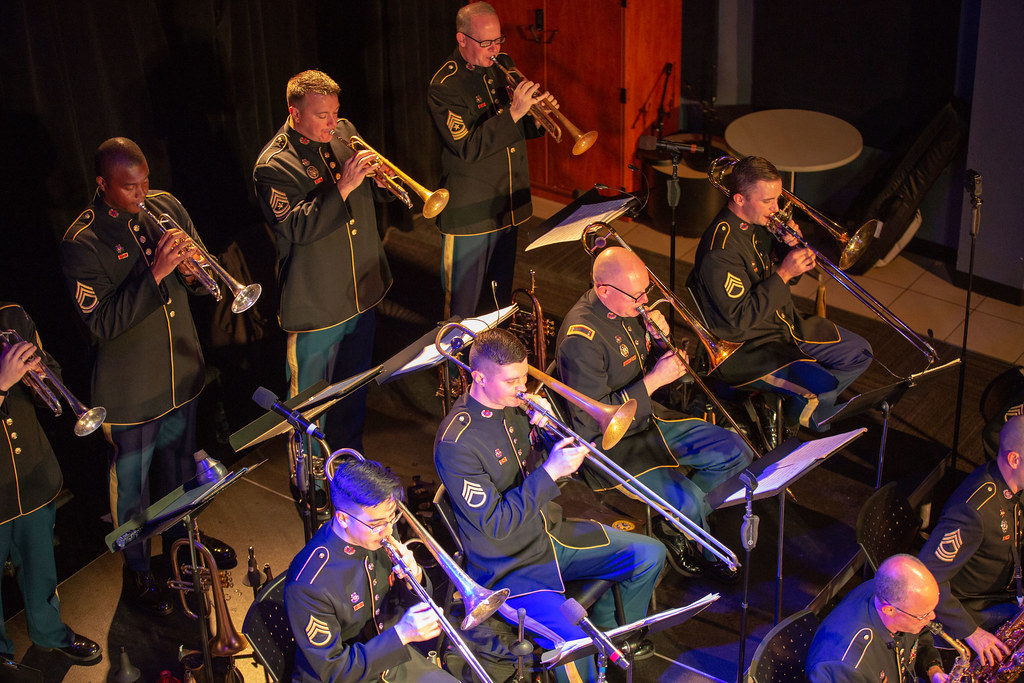 The Army Jazz Ambassadors will conclude the first day of the 2021 Gadsden State Jazz Festival with a concert at 7 p.m. Nov. 4 at the Gadsden City High School Theater.

NOTE: Due to expected low temperatures, the outdoor concerts planned for Nov. 5 have been moved to the Downtown Civic Center.

Gadsden, Ala. — Since 2017, Gadsden State Community College has celebrated a musical genre unique to the American musical landscape – jazz. This year, the College continues to honor jazz music of past and present at its annual Jazz Festival, themed “Celebrating Jazz in Alabama.” It will be held Nov. 4-5 and is hosted by the Gadsden State Division of Fine Arts and Music in cooperation with the Jazz Education Network. It is free to the public.

“After cancelling the 2020 event due to the COVID-19 pandemic, we are excited to expand the 2021 Jazz Festival to two days,” said Dr. Matt Leder, instructor and director of the Gadsden State Show Band. “We hope that every musician and fan of this music will take the opportunity to come to the festival at least once over the two-day event.”

“The Jazz Festival is a great opportunity for students to learn from stellar clinicians,” Leder said. “They can also hear from the best in the business. The Jazz Festival welcomes students, community members and professional musicians to enjoy two days of entertainment and education.”

Typically, the Jazz Festival is held at the Wallace Hall Fine Arts Center but has been moved for the 2021 event due to heating and cooling issues at the Gadsden State venue. Instead, the first day of the Jazz Festival will be held at the Gadsden City High School Theater. The second day will begin in the Downtown Civic Center on Broad Street in Downtown Gadsden and will end with the finale concert at the GCHS Theater.

“It would’ve been easy to just cancel the event for another year because of the challenges we face with not having Wallace Hall available to us,” said Leder. “But, we don’t like easy. It’s important to the Division of Fine Arts and Music and to Gadsden State students to have an event, like the Jazz Festival, that can be enjoyed by everyone in our community. It’s a rare treat to be able to enjoy music from the caliber of musicians we offer at the Jazz Festival without paying admission.”

In addition to the concerts and the clinics, participating ensembles will have the option of being adjudicated. Adjudicators include renowned jazz musicians and clinicians, Tim Leahey and Dr. Michael Pendowski.

Leahey has been performing professionally since the age of 9. Most recently he was a member and jazz soloist for the Airmen of Note, the jazz ensemble of the U.S. Air Force, as well as the Shook Russo Quintet. He has been featured as a soloist on over two dozen recordings. Pendowski is director of the Auburn University Jazz Ensemble and assistant professor of saxophone. He is a prominent composer in the educational field having published dozens of compositions for the full spectrum of ensembles in schools and universities.

Leahey and Pendowski will kick-off the festival at 11 a.m. Nov. 4 at the GCHS Theater with a clinic and question-and-answer session.

“We have some of the best jazz musicians of our time coming to Gadsden for this festival,” Leder said. “It is an honor that these fine musical experts are willing to teach clinics and perform for our community.”

At 11:40 a.m., the Jacksonville High School Jazz Ensemble will take the stage followed by a lunch break at 12:10 p.m.

A clinic hosted by Mobile native Greg Gisbert will be from 1 p.m. to 2 p.m. The internationally-known trumpeter has played alongside Wynton Marsalis, the Lincoln Center Jazz Orchestra, the Woody Herman Orchestra, Toshiko Akiyoshi, Maynard Ferguson and Maria Schneider as well as big bands from the Smithsonian, Carnegie Hall and Vanguard. He has released three albums on the Criss Cross label.

The Nov. 4 schedule rounds out with performances from the University of Alabama at Birmingham Jazz Ensemble at 2 p.m., the Jacksonville State University Jazz Ensemble I at 2:40 p.m. and the Five Points Jazz Quintet at 3:20 p.m. Wallace State Community College Jazz Ensemble takes the stage at 4 p.m. followed by Big Band Theory at 4:35 p.m.

The concert finale on Nov. 4 will begin at 7 p.m. with opening act, Hoover First Edition Jazz Ensemble. They will be followed by the main act, the Army Jazz Ambassadors.

“The Army Jazz Ambassadors are truly one of the best touring jazz orchestras in the country,” Leder said. “They consistently receive critical acclaim from both professionals and the casual jazz fan.”

The Army Jazz Ambassador concert will include classic big band standards, patriotic favorites, contemporary jazz works and original arrangements and compositions by past and present members of the group.

Following the concert, a “musicians hang” jam session will be held at Back Forty Beer Co.

On Nov. 5, the Jazz Festival will move to the Downtown Civic Center and kick off at 11 a.m. with the Birmingham-Southern College Jazz Ensemble. Creative Soul, a jazz ensemble comprised of Leder and past and current members of the Gadsden State Show Band, will take the stage at 11:40 a.m. Piano soloist Julio Barreto will follow at 12:20 p.m.

Native Alabamian Sherman Irby will present a clinic at 1 p.m. He has recorded five albums and has toured with the Boys Choir of Harlem and is a member of the Lincoln Center Jazz Orchestra. He has recorded with Marcus Roberts as well as Betty Carter’s Jazz Ahead Program and Roy Hargrove’s groups. Since 2003, Irby has been the regional director for Jazz Masters Workshop, which enriches the lives of young people while developing musicians interested in pursuing the performance of jazz music.

At 2:10 p.m., the Gadsden State Brass Band takes the stage followed by the University of Montevallo Jazz Ensemble at 2:50 p.m. Gadsden State graduate and pianist Myles Probus performs from 3:30 p.m. to 4:30 p.m.

After a quick set-up, Oracle Blue Band performs at 5 p.m. The Nashville-based group’s sound is described as the “blending of elements of neo-soul, electronic music and Black American music to create a newfangled soundscape with a sullen danceability.” The group began as a student jazz combo at Coastal Carolina University and now has a debut album, “Gilded Kingdoms.” The band tours up to 48 weeks a year while holding down a residency at Rudy’s, a popular jazz club in Nashville.

After Oracle Blue Band wraps up at 6 p.m., the Jazz Festival will return to the GCHS Theater for the Finale Concert, which will feature the Gadsden State Show Band performing with Irby and Gisbert as well as a short set from members of the Alabama Jazz Orchestra.

Immediately following the concert, the traditional After Party Jam Session will be held at Back Forty Beer Co. There will be no cover charge. Musicians are encouraged to bring their instruments and sit in to perform with special guests.

“We are exposing our community to the jazz culture, and we are so excited about this being an annual event,” Leder said.