Tillis goes from student to director at the Valley Street Campus

Gadsden, Ala.— Ricky Tillis started his higher education journey as a carpentry student at Gadsden State Community College’s Valley Street Campus in 1992. Fast forward almost 30 years and he’s now the director at the campus where it all began.

“My time at Gadsden State has come full circle. I started here as a student and returned as a student; became an employee, and now, I am the campus director,” he said. “It’s sure been a wonderful progression.” 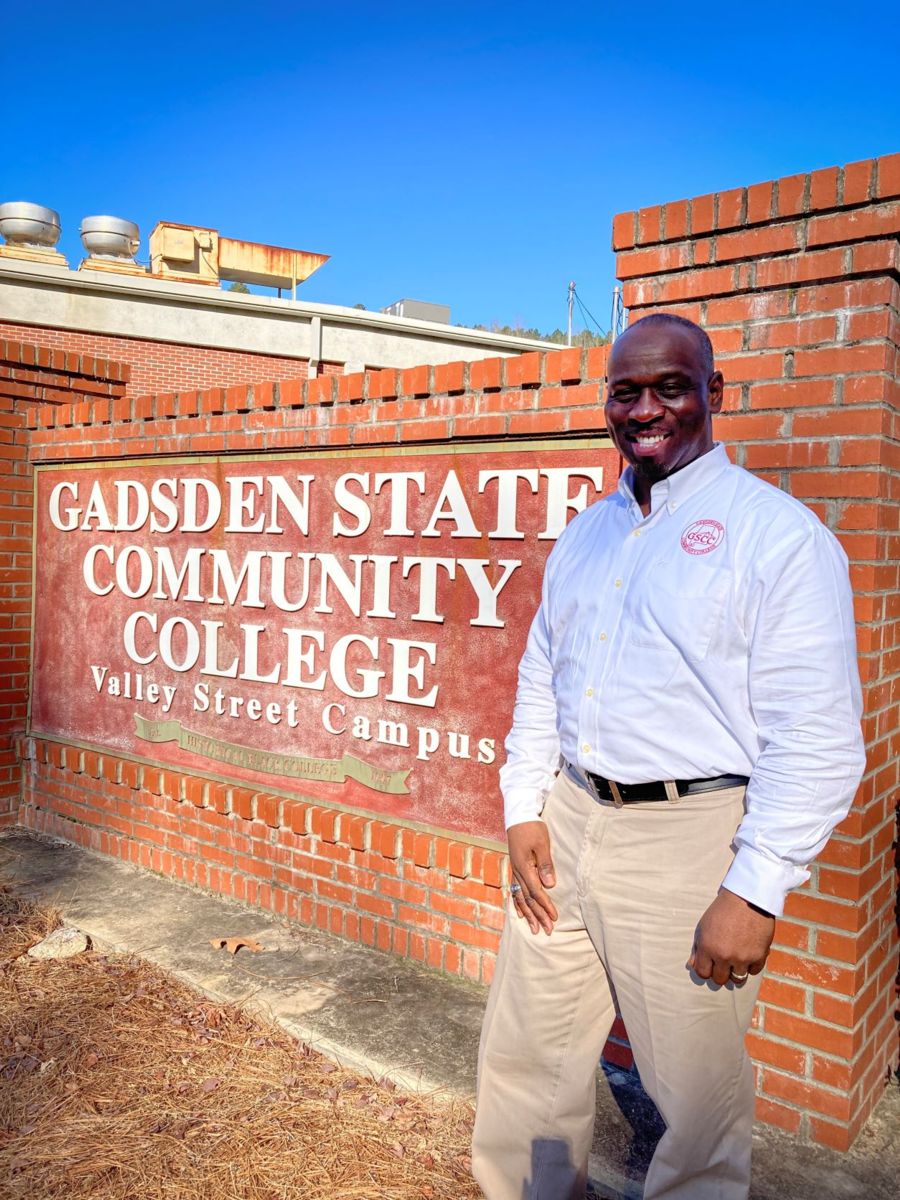 Tillis was appointed as the new campus director on Jan. 11.

“I’m humbled and grateful for this opportunity,” he said. “I’m in a position where I can really help students, faculty and staff in bigger ways. I want to be a voice for them so that we may see improvements come to our campus.”

Tillis is a 1992 graduate of Gadsden High School, where he was a member of the 1991 state championship football team. He also played for the 1992 Alabama Raiders semi-professional football team. After graduation, he enrolled in the carpentry program on the Valley Street Campus. In 1994, he surrendered to his calling to the ministry and enrolled at the Birmingham-Easonian Baptist Bible College. In 1998, he earned a bachelor’s degree in Pastoral Studies.

While in college, he worked in warehousing and trucking but changed vocations in 1999 when he was hired as a treatment aid at The Bridge, a facility that provides substance use disorder treatment and behavioral rehabilitation for adolescents. Over the next several years, his career progressed to counselor of the Male Adventure Treatment Program, counselor for the alcohol and drug program and, later, program director for the CARE Unit.

Not one to shy away from a challenge, Tillis continued his education while working at The Bridge. He earned a master’s degree in Biblical Studies in 2001 and a second master’s degree in Religious Education in 2002 from the Birmingham Theological Seminary.

In 2005, he became a full-time minister, a profession he has served in since 1997 beginning at Bethlehem Baptist Church in Glencoe followed by Sunlight Missionary Baptist Church in Eastaboga. He and his wife, Angela, started the Harvest Fellowship Community Church in East Gadsden in 2004. He continues to serve as the church’s pastor.

Though he had a wonderful career as a minister, he said he still longed to finish his education.

“I never like starting something I don’t finish,” he said. “So, I returned to Gadsden State in the spring of 2011.”

Tillis later transferred to Athens State University, where he received a Bachelor of Science in Liberal Studies with a minor in Sociology in 2019. He is currently studying for a Master of Education with a major in Career and Technical Education and a concentration in Leadership from Athens State.

In January 2014, he found himself back at the Valley Street Campus when he landed a job with the College’s Physical Plant Department. Eventually, he made the decision to seek a position where he can make an impact on the lives of students.

“I’ve always been in a position of coaching, and I’ve always loved interacting with students,” he said. “To encourage and assist students in their educational pursuits is my passion.”

In November 2020, he was hired as the program advisor for Title III, which is a program designed to enhance the academic programs, fiscal management and physical resources of the Valley Street Campus. Tillis continues to work with Title III students in addition to his role as campus director. As the program advisor, he tracks and monitors students to determine academic progress, retention and graduation. He provides academic advising and develops individual educational plans while working with academic directors, faculty and advisors. He also oversees workshops in decision-making, resume writing, financial management and more.

Tillis said he is excited to take on the additional duties of being campus director. His major goal is to advance student and community engagement by bringing focus to the Valley Street Campus, which has not had a permanent director since 2017.

“I want to improve upon the foundational work that has already been laid by the previous campus directors,” he said. “I consider this an honor and responsibility.”

“It’s top on my list,” he said. “We have students driving from Rome, Ga., from Heflin, from Birmingham, from Decatur and from Montgomery. They’re passing other colleges because they want to come to Gadsden State. They’re serious about their studies here. We need to provide an environment that is warm and welcoming. That’s important.”

The campus has hosted cook-outs, a fall tailgating event and fun and educational activities during HBCU Week.

“Something as simple as providing popcorn and drinks breaks up the monotony for them,” he said. “I want them to stay engaged. We want them to learn but we also want them to have fun.”

Tillis also wants to reconnect with the neighborhood surrounding the Valley Street Campus.

“I’ve spoken to some neighbors about meeting,” he said. “I would like to hear from them. I think we need to have a strong connection with the people who live in the neighborhood our campus is in. We want our neighbors to come on our campus. We want them to see what educational and training opportunities we offer.”

Tillis said he is blessed to have faculty and staff who are committed to the educational well-being of the students. They are the difference-makers, he said.

“As a former athlete and coach, the term ‘team’ means a lot to me,” he said. “Everybody at Valley Street is important and has a role to play. Coming together as a team for the better good of others is what the Bible points out in Philippians 2:3-4 – ‘Do nothing from selfishness or empty conceit, but with humility of mind regard one another as more important than yourselves; do not merely look out for your own personal interests, but also for the interests of others.’

“Everybody is important to the Valley Street team,” he said. “They may not be the quarterback of the team, but they play an integral role.”