Gadsden, Ala. — The Public Relations and Marketing Department at Gadsden State Community College earned nine awards for exemplary work at the Alabama Community College System Public Relations Association Conference. It was held Sept. 6-8 in Gulf Shores. Pyramid Awards, Certificates of Achievement and Certificates of Merit were awarded to top PR and marketing projects among the state’s community colleges.

“We are humbled and honored to receive awards from our fellow PR and marketing practitioners,” said Jackie Brehm Edmondson, director of public relations and marketing at Gadsden State. “We know our marketing efforts are working with the increases we’ve seen in enrollment but these awards validate our marketing strategies as well as our creative talents. I’m so proud of our team.”

Joining Edmondson in the PR and Marketing Department are Brandy Hyatt, public relations specialist; Laura Catoe, website and social media specialist; and Kathy Brown, administrative assistant. Gadsden State won the most Pyramid Awards (first place) among its sister colleges. Over 300 entries were submitted for the awards and were judged by 20 professionals in three states.

A Pyramid Award was earned in Electronic Publications and Newsletters for the 2021 Annual Report, which is written by Edmondson and designed by Catoe. It is the third year in a row that Gadsden State earned this top honor for its annual report. It can be seen at www.gadsdenstate.edu/annualreport.

A Pyramid Award was also received the Video Advertisement / Public Service Announcement Category for the “Watch Me Fly” commercial. The script and storyboard were created by the PR and Marketing staff. The commercial was produced in partnership with Venture Marketing.

In the Wild Card-Electronic Division, Gadsden State won another Pyramid Award for Pick Your Path, which focuses on career technical and dual enrollment opportunities. It includes program videos, posters and digital ads that were created by Hyatt and Edmondson in partnership with Carl Brady, workforce program manager at East AlabamaWorks, and Alan Smith, dean of Workforce Development at Gadsden State.

The fifth Pyramid Award was earned in the PR and Marketing Campaign for “13 Things.” The campaign linked material objects to the money saved when choosing to attend Gadsden State over a four-year university. The campaign included digital ads, billboards and a microsite. It was written by Edmondson with the creative elements developed by Hyatt and microsite built by Catoe.  Visit www.gadsdenstate.edu/13things.

A Certificate of Merit (third place) was also received by the Gadsden State team. An inspirational story about Kaitlyn Meats was recognized in the Student Success Story category. The story, which can be seen in the 2021 Annual Report, was written by Edmondson.

In addition to receiving awards at the conference, Hyatt made a presentation about animated advertising. ACCSPRA members also approved a new slate of officers. Edmondson will serve as the president-elect of the statewide organization through September 2023. She has been a member of the organization since 2015. 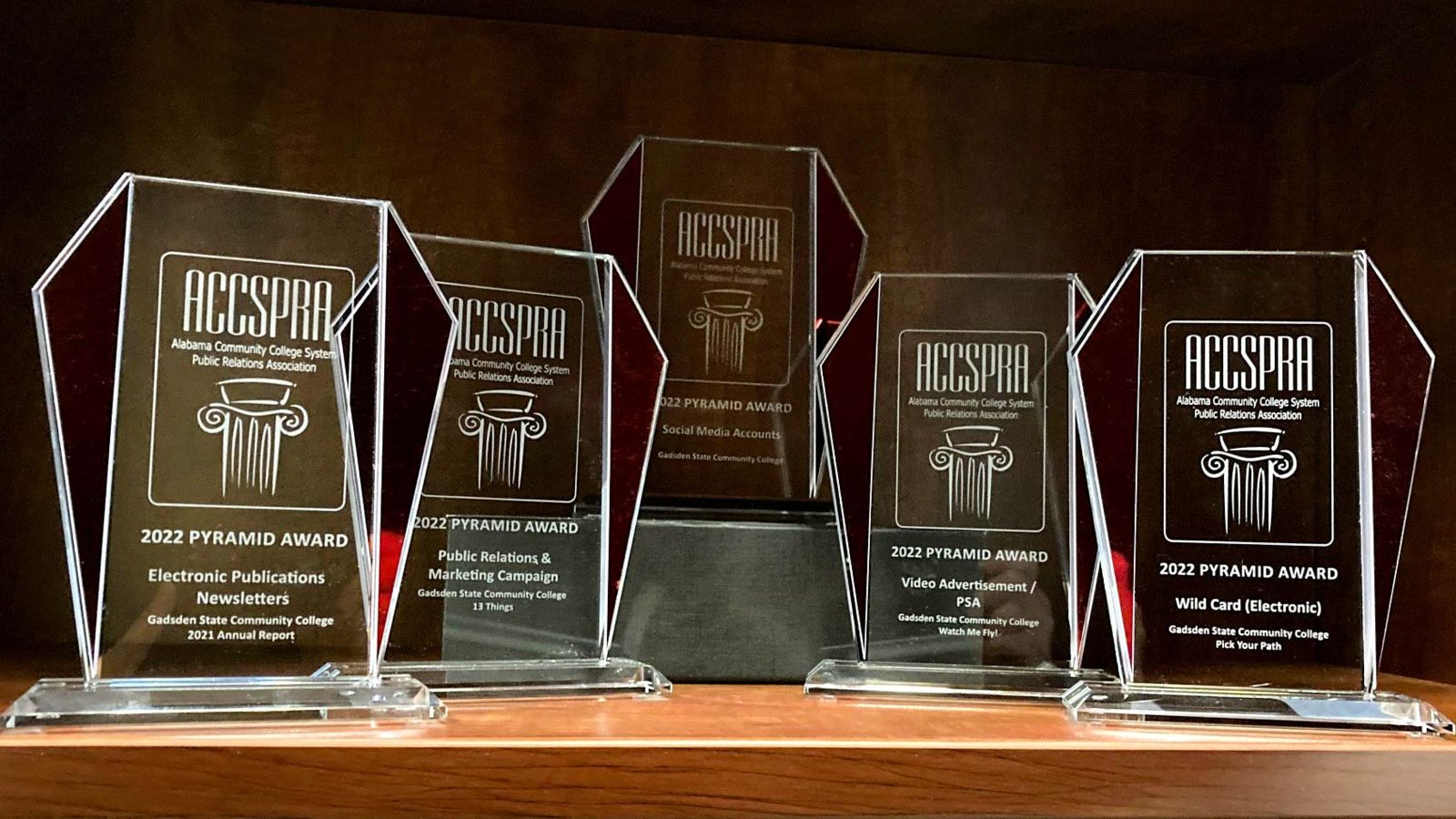